From EtoneWiki
Jump to: navigation, search

Consider throwing [math]m[/math] balls into [math]n[/math] bins uniformly and independently at random. This is equivalent to a random mapping [math]f:[m]\to[n][/math]. Needless to say, random mapping is an important random model and may have many applications in Computer Science, e.g. hashing.

We are concerned with the following three questions regarding the balls into bins model:

There are [math]m[/math] students in the class. Assume that for each student, his/her birthday is uniformly and independently distributed over the 365 days in a years. We wonder what the probability that no two students share a birthday.

Due to the pigeonhole principle, it is obvious that for [math]m\gt 365[/math], there must be two students with the same birthday. Surprisingly, for any [math]m\gt 57[/math] this event occurs with more than 99% probability. This is called the birthday paradox. Despite the name, the birthday paradox is not a real paradox.

We can model this problem as a balls-into-bins problem. [math]m[/math] different balls (students) are uniformly and independently thrown into 365 bins (days). More generally, let [math]n[/math] be the number of bins. We ask for the probability of the following event [math]\mathcal{E}[/math]

We first analyze this by counting. There are totally [math]n^m[/math] ways of assigning [math]m[/math] balls to [math]n[/math] bins. The number of assignments that no two balls share a bin is [math]{n\choose m}m![/math].

Thus the probability is given by:

There is also a more "probabilistic" argument for the above equation. Consider again that [math]m[/math] students are mapped to [math]n[/math] possible birthdays uniformly at random.

which is the same as what we got by the counting argument. 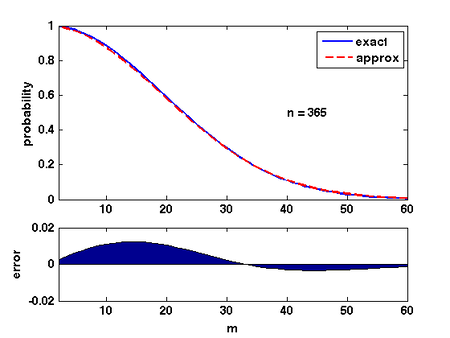 There are several ways of analyzing this formular. Here is a convenient one: Due to Taylor's expansion, [math]e^{-k/n}\approx 1-k/n[/math]. Then

The quality of this approximation is shown in the Figure.

Only knowing the expectation is not good enough. We would like to know how fast the probability decrease as a random variable deviates from its mean value.

An easy analysis shows that for every bin [math]i[/math], the expected load [math]\mathbf{E}[X_i][/math] is equal to the average load [math]m/n[/math].

Therefore, due to the linearity of expectations,

Because for each ball, the bin to which the ball is assigned is uniformly and independently chosen, the distributions of the loads of bins are identical. Thus [math]\mathbf{E}[X_i][/math] is the same for each [math]i[/math]. Combining with the above equation, it holds that for every [math]1\le i\le m[/math], [math]\mathbf{E}[X_i]=\frac{m}{n}[/math]. So the average is indeed the average!

When [math]m\gt n[/math], Figure 1 illustrates the results of several random experiments, which show that the distribution of the loads of bins becomes more even as the number of balls grows larger than the number of bins.

Formally, it can be proved that for [math]m=\Omega(n\log n)[/math], with high probability, the maximum load is within [math]O\left(\frac{m}{n}\right)[/math], which is asymptotically equal to the average load.